Once you have your billing system setup, please email billingactivation@teamunify.com to begin producing monthly invoices.

The first step when setting up billing is to define which groups to charge different recurring amounts and when. Before diving in it is important to understand the distinction and relationships of different groups.

For all of the above groups, athletes can only belong to ONE of each at a time. For instance, an athlete could not be in both a Bronze and Silver Roster Group simultaneously.

As we give instructions for each area, we will use the scenario below as an example of how all these groups relate to each other.

This is a moderately complex billing setup but SwimOffice can easily handle it. Let’s begin.

We want to track the income for all three groups, along with the resident and non-resident rates. We will set up CoAs that look like below in the next lesson. 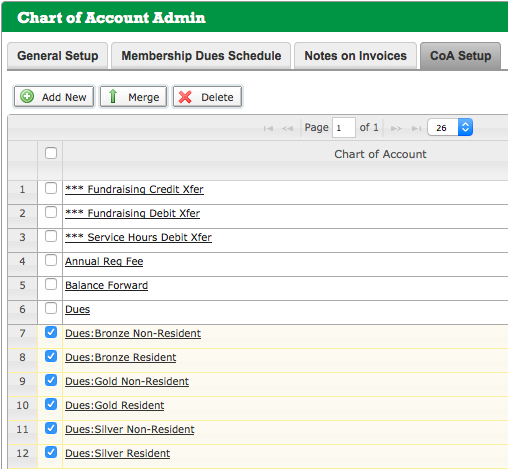 Here you define the groups to charge recurring fees. If you charge all groups the same amount, you could have a single Billing Group called “Swim Team.” But you will likely have more than that, especially if you want to track the income for each group. This is why Billing Groups usually mirror Roster Groups. Note that if you change a Billing Group you will see those changes reflected everywhere it is used, such as Account/Member Admin.

To add a Billing Group:

In our scenario, all we need here are the three groups. While we could have separate groups for resident and nonresident, we will handle those in the Sub Billing Groups instead.

Next, we set up groups that determine what months to generate recurring fees for all the Billing Groups. They are useful for different payment plans such as monthly or annual, and for different seasonal plans, such as year-round and summer. They are duplicated in each Billing Group, even though you may not need every option for every Billing Group.

In our scenario, we create Full Payment and Monthly Payment options for both residents and non-residents. Even though we collect the full payment during registration, we still need to select one month in which to bill, but we will later set the amount to $0 since they pay when they register.

If you just set up your Billing Groups, skip to step 3.

As previously mentioned, Roster Groups do not affect billing in any way. They are mainly used for organization purposes, such as taking attendance in OnDeck and emailing. Resident and nonresident status do not matter in our scenario, so we will keep them basic. If you just set up your Sub Billing Groups, skip steps 1-2.

These do not affect billing either; however, they can be used for different pricing options in Registration Setup. They are used when taking attendance in OnDeck. Most teams will only have one location.

For those with multiple locations, remember that an athlete cannot belong to more than one Location at once. If they float among different locations and don’t permanently belong to any single place then you may want just one generic Location. Otherwise, enter as many as you need. Nothing tricky here for our example.

Congratulations on completing your Groups! Now it’s time to build your Chart of Accounts.